I want to share with you all – and seek your collective wisdom about – a mapping project that I have been working on intermittently for the past year, and a version of which I presented this past fall at the Pacific Northwest History Conference under the title “Putting Workers on the Map: Agricultural Atlases, Hidden Farmworkers, and a Method for Remapping Labor in Oregon’s Willamette Valley.” My research is with immigrant farmworkers, and when I consulted historical agricultural atlases for background, I began to notice that laborers are nearly entirely absent from what are otherwise very thorough atlases.

Now, this should not be a surprise to anyone who has worked on farm labor. Farmworkers are racialized, excluded from ordinary labor protections, and generally hidden from view. Agricultural abundance in general – and particularly in the Willamette Valley, which was the end-point of the Oregon Trail and has a long history of exuberant bragging about its agricultural richness – tends to be chalked up to natural characteristics of the land, and workers conveniently forgotten. But still, it seems incredible that atlases can have maps showing the precise number and distribution of berry farms and not even nod to those who pick them.  An example of one of these standard atlas images is shown below. 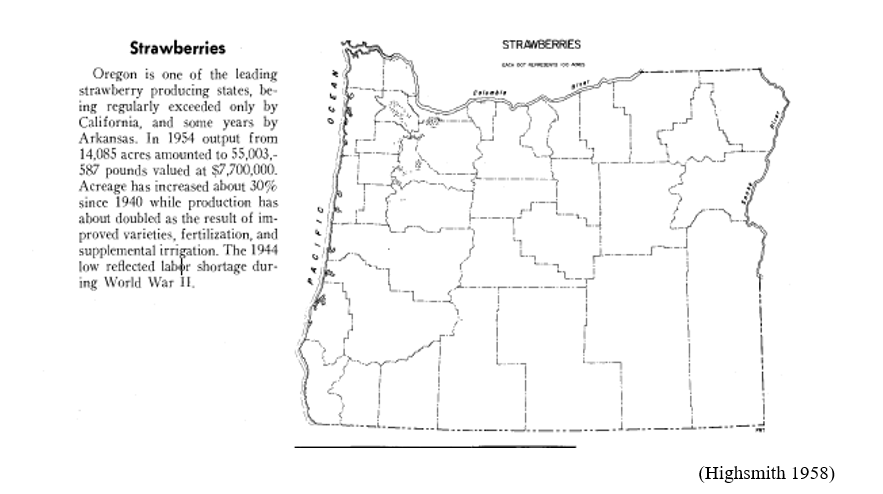 So I decided to try an experiment, and use USDA Agricultural Census data on crop coverage on a county level, paired with contemporary and historical estimates about the person-hours involved in picking those crops, to use GIS to map the land not in terms of crops’ extensiveness, but instead in terms of the extensiveness of different kinds of labor. Below, you can see an example of what this looks like: two different crops, side by side in the same year, mapped once in terms of acreage and once in terms of labor hours – the difference is obvious. 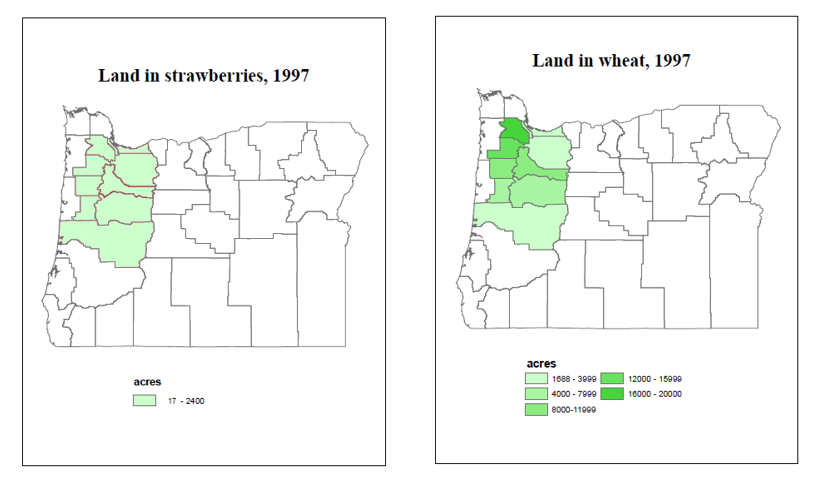 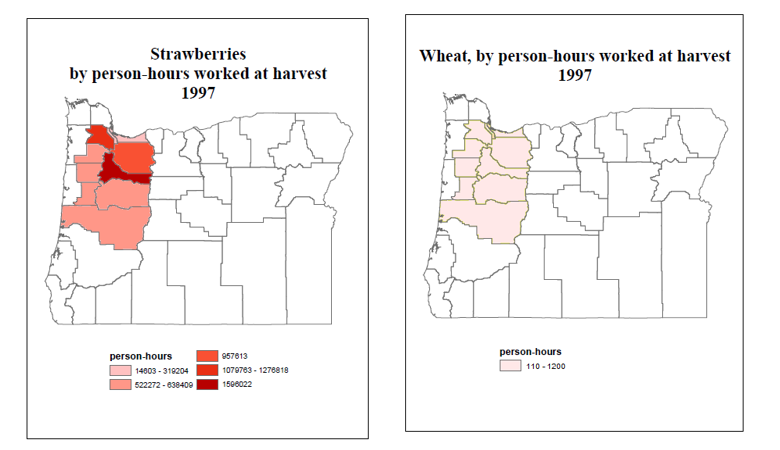 The differences in perspective that these maps help us to see become meaningful when you consult the ethnographic record and realize the vast differences between different sorts of farm work. In the example given above, wheat is harvested mechanically, often by farmers; strawberries, by contrast, require notoriously backbreaking stooped labor. This information, paired with the sort of labor maps generated above (and in sharp contrast to conventional agricultural maps) help to explain why farm labor organizing in Oregon has often involved clashes in the berry fields, and why wheat is virtually never mentioned in farmworker testimonies and memoirs. And more generally, these sort of maps help us to rethink landscapes from the point of view of workers rather than landowners.

So this, more or less, is where I left my presentation. And this is where I want to ask for help. This project obviously only taps one small part of the power of what GIS can do. And USDA data provides a very large dataset, of which I only used the smallest part. So where should I go from here? There’s plenty of data, that’s not the problem. But what are GIS-friendly question that I should be asking, questions that are worth the time they would take? Or this project reached its natural conclusion already? One question I have thought of exploring is to examine change over time – to map historical labor landscapes over the course of the century for which we have records, and to explore changes in the sorts of labor that have predominated, and how these shifts may relate to the sort of labor being used (for instance, when the Bracero program brought massive numbers of Mexican workers to the Northwest for the first time, was there a shift to more labor-intensive crops?). But is this worth the massive amount of data-cleaning that it seems that it would involve – and is it even really a spatial question, such that it would make sense to do it in GIS? I’d love to hear some feedback, any suggestions or criticism at all would be a big help as I plot my next move!

This site is part of the HASTAC network on Humanities Commons. Explore other sites on this network or register to build your own.
Terms of ServicePrivacy PolicyGuidelines for Participation