How to Change Our Classrooms (and Digital Spaces) to Empower Girls: Insights from Dr. Urvashi Sahni

We are excited to share the inspiring words and expertise of Dr. Urvashi Sahni, founder and CEO of the Study Hall Educational Foundation based in Uttar Pradesh, India. Dr. Sahni’s work centers on classrooms as “radical spaces of possibility” (a phrase she quotes from bell hooks).  She weaves in critical and feminist pedagogies to integrate drama as a transformative, subject-forming, and civically engaged practice in the classroom and in her Digital Study Hall which extends the reach to girls and young women.

Under SHEF, Dr. Sahni has established three K–12 schools to provide rights-based education to over 1000 girls and provides education to 4000 students from various backgrounds. She also co-founded Digital Study Hall in 2005 to extend the pedagogical approaches at SHEF to over 100,000 students and teachers. Dr. Sahni received her Ph.D. in education from University of California– Berkeley. She is the author of Reaching for the Sky: Empowering Girls Through Education. Dr. Sahni is an Asoka Fellow and a Schwab Fellow.

What follows is a transcript of Dr. Sahni’s remarks condensed from an interview I conducted with her by phone on December 17, 2019:

“Education is a very powerful transformative force provided we transform what we teach, how we teach and why we teach. So children must find themselves and find education tools for constructing themselves in relationship to others and relationship to the universe— which is why I think critical pedagogy should be the pedagogy we use. Secondly, critical dialogues around issues that frame our lives, around issues that are socially and politically relevant should find their place in the official curriculum. We don’t have functioning democracies because we don’t teach children how to be good democratic citizens and being a good feminist is being a good democratic citizen. So, it should have a place of pride in the curriculum.”

“We found that because we enriched our curriculum with the critical dialogue, it has made a world of difference to our children. What it does is- it creates a school culture of dialogue, a school culture of critical thinking and that helps in developing a social and political consciousness about how you think about the social reality in which you live? How do you think about the political reality, the power structures which frame your life, which limits or extend your freedom? To learn to think about those, it should form part of our school education. So there’s a lot of talk of life skills and how important they are, yet they are normally after school programs, tacked on programs. I’m not sure I like the term life ‘skills’. It’s too euphemistic — I think we should be aiming at life ‘knowledge’.”

“So it learning about life should be part of your school curriculum. You’re spending so much time getting an education why shouldn’t you learn how to live, why shouldn’t it be in the official school program instead of an extracurricular thing. Why is mathematical thinking more important than social, political thinking, and personal thinking? What is going to be of greater use to you? What is going to help you be resilient, face the challenges you face, negotiate the difficult terrain of life, especially for people who live in very challenging circumstances? So that’s my idea of curricular reform.”

Dr. Sahni on Transformative Possibilities for Technology in Education

Dr. Sahni’s work often thinks through the possibilities opened up in combining technology and education. Her innovative program, Digital Study Hall makes use of these possibilities to extend the reach of her work to students and educators throughout India. The Hindustan Times explains, “DSH works on a simple idea of using available and cost effective technology to improve the quality of education in rural and underserved areas. The beauty of the entire initiative lies in the low cost model that it has managed to develop.” 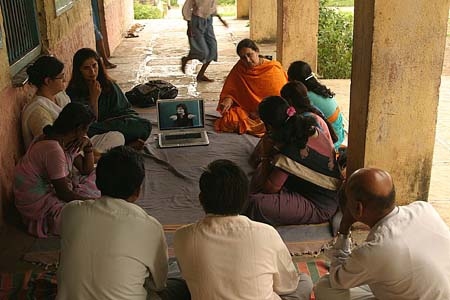 “Now whenever you think of a progressive curriculum or progressive schools, at least in India, people immediately  jump to big-bad-MAGIC-technology. I think technology is just a medium. It is the content of our curriculum that needs to change. Also schools should stop pretending that they are apolitical— they aren’t. Even when you refuse to accept or state your political stance intentionally, you actually by default are reinforcing the status quo and that is all a political act. So why not take responsibility for it and then intentionally be politica> We live in societies. and political systems. We are political animals. We know we are rational animals. We are also emotional animals. We are political animals and social animals too. So schools should stop pretending we live in some kind of political vacuum.”

“Literacy in and of itself, isn’t going to do anything— it is what you read, what you write, that’s what matters.”

“Literacy in and of itself, isn’t going to do anything— it is what you read, what you write, that’s what matters. That is what will change things because you always read something. You always write something, so what you’re writing and what you’re reading is going to determine what impact it will have on your life or not.” 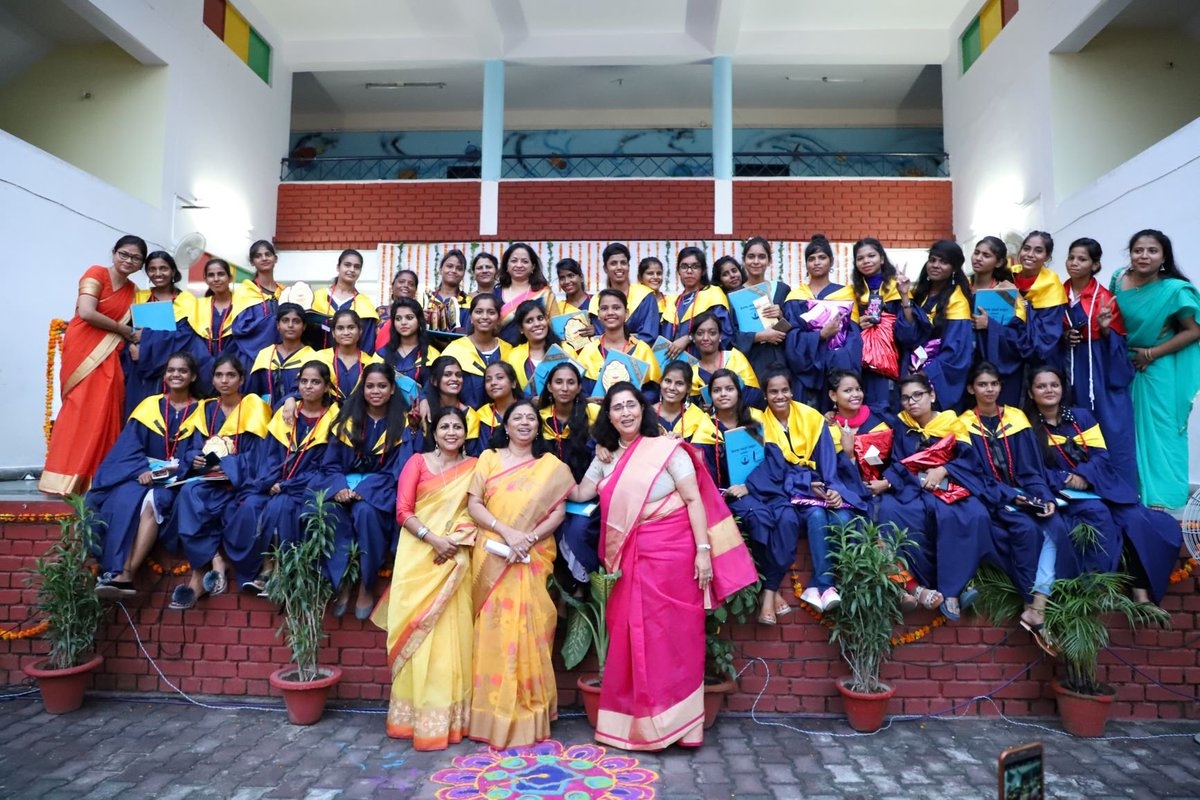 Marriage is a theme that is most relevant, specially to girls in a society like ours where it is made the all important goal in a girls life.. So discussing what marriage means, its implications for girls. Patrilocality and its implications for girls – how vulnerable it renders all girls. For girls from marginalised communities, child marriage is very relevant. They are very vulnerable to that. Also, being a girl and what it means in relationship is to violence. Violence at home, violence on the street. Because we can reproduce, how does that impact us? What are our reproductive rights? What does it mean to give birth to a daughter? What does it mean to have children, and who controls how many children we can have, and when we have them? And what it means about any control over your life. We pick these themes and we have critical dialogues around them and what that means is that the teacher will serve as a facilitator and she will ask probing questions which help them question the status quo and come to a deeper understanding of it.  They will be helped to name their realities so that they can transform them”

“For example, if we are talking about violence at home, looking at who hits who at home and why? And if it’s normally the fathers that hit the mothers, men that hit the women, then why do they?  Why don’t women normally retaliate? You know it helps them to question why they don’t and normally they will say that society doesn’t really give them the right. So then we started to move to a discussion about power. Who has power and who doesn’t have it and why and that’s how we move on to discussing patriarchy and trying to understand how its wrong. It’s not natural. It’s a social construct; it is a historical construct.”

“The goal there is to have [girls] recognize themselves as equal persons and we find the idea of citizenship to be very powerful, especially in older children to provide legitimacy and justification for their right to assert themselves as equal persons. So … in the course of this we find that using improvised drama is very, very powerful where they actually play out what goes on at home. And they try and play out what an alternative reality might look like, so its a safe place where they can play out various scenarios, even play out rebellion without any real consequences. It’s almost like rehearsing resistance in a safe place and then negotiating how you would do it safely in real situations. They also use artwork and poetry. The arts help us both express our feelings and educate our feelings.”

“These discussions happen over time and what happens with these is it helps girls move to a new normal where being equal is normal and against a time when inequality was normalized in their imagination. Where they first believed that if you’re a girl discrimination is what you should expect and that’s normal. Now they learn to believe that being treated equally is normal and their right.”

Equality Should Be “Normal”

“Now they’ve understood ‘yeah so what if I’m a girl, we should expect equality and that is normal.’ Not just the girls, the boys too, we have found they have moved to this new idea of normal where if you’re a boy, yes, you have privileges but you realize that girls have feelings and fears and aspirations and anxiety. They are human. And like them and they should learn to recognize that. How do you become a different kind of boy – a caring, sharing, gentle boy, without becoming less of a man, without it reducing your ‘manhood’? How do you learn to think of masculinity – manhood and boyhood differently? The activities we use largely are the discussions, a lot of roleplay and drama, interviewing of the women in their lives.”

“We have them interview their sisters, their mothers, the women in their home. The girls too, we had them interview their mothers, for example. They go to find out about their mom and what her marriage was like and when they heard it they went ‘oh my God!!’ They came back and told the stories. Using that as context you talk about patriarchal marriage. The first steps of course is to get them to see that the way they are treated, rendered vulnerable and powerless is wrong – NOT natural and to denaturalize it. Then to see what the root, structural causes are – gain a historical understanding of all these unfair power structures as human  made NOT God given – which can be deconstructed, have been deconstructed elsewhere in the world and then to move towards imagining an alternative reality. We try to give them as many media types to express themselves. The whole point is: how to construct a more empowering self. What are the tools you can use? We use poetry. We use painting. We use story writing and telling. Digital stories, video stories. We use drama – all kinds of drama –  improvised drama, performance drama, street drama, all very, very powerful ways of expressing themselves and expressing their indignation safely, resisting safely and then expressing an alternative vision for themselves. So these are some of the activities we use.” 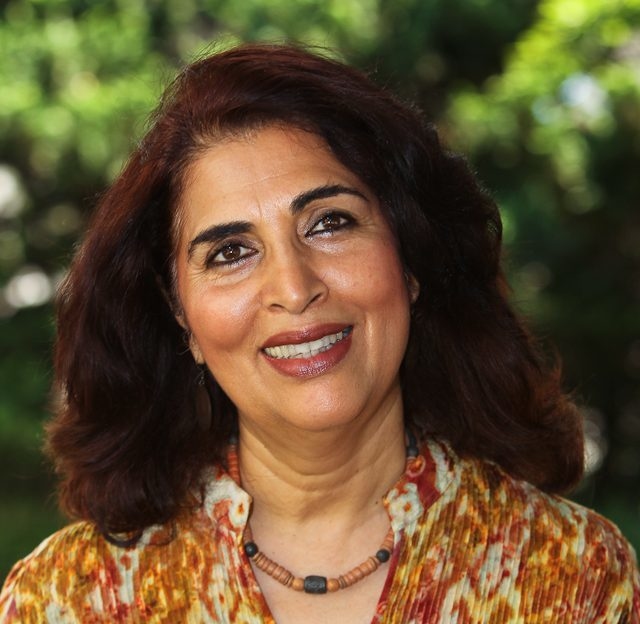 More information about Dr. Sahni and SHEF’s use of drama in rights-based education can be found in her book Reaching for the Sky: Empowering Girls Through Education. In it, there are more in depth explanation of how drama, improv, and interviewing are use in the classroom towards right-based education. Reaching for the Sky draws on her fourteen years of experience with Perna Girls School and “argues that education can be truly transformative if it addresses the everyday reality of girls’ lives and responds to their special needs and challenges with respect and care.” You can also view her TEDx talk for more information.

Activism & Civic Engagement, Gender & Sexuality, Race & Ethnicity
This site is part of the HASTAC network on Humanities Commons. Explore other sites on this network or register to build your own.
Terms of ServicePrivacy PolicyGuidelines for Participation