For my first blog post on HASTAC, I want to share the start of my current work as a doctoral student in the Arts, Technology, and Emerging Communication department at the University of Texas at Dallas. I have been a gender-based violence expert and social justice advocate for 15 years. It takes great pride for me to share a project that is very close to my personal and professional interests, a project that takes inspiration from feminist theories and liberationist pedagogy.

In 2015 I initiated Project Kali: Celebration of Womanhood that focused on providing a safe healing space for women who have had a history of abuse, trauma, and domestic violence in Baltimore, MD. I refer to them as the Kali Warriors.

I operate with the philosophy that creativity is a pledge to embrace and value one’s existence through self-reflection—a process for changing awareness, sense of self-worth, and future behaviors. The marriage between creativity and self-reflection brings forth a unique language that speaks beyond words. It signifies the change that helps individuals visually express feelings and emotions, which are difficult to articulate through conventional means. It is a tool for personal metamorphosis that is the determining rationale for this project.

The project title is inspired by a Hindu mythological figure, Goddess Kali—the healer of agony and manifestation of hope— inviting women to bring their baggage of pain, despair, and melancholy, tailor their experiences and emotions into various artistic souvenirs, and collectively discover the emergence of Kali within. Therefore, I worked on reviving not only the artistic voices of the participants but also a chance for them to be heard and healed through the process of sharing and nurturing. Witnessing the emotional and physical distresses of the women participants, there was clear evidence in building a safe space for them as a way to express their traumatic struggles using different art-based activities.

The artworks produced by the Kali Warriors proved that aesthetic investigations benefited their emotional needs as well as enabled them to represent their interests in a self-determined way by acting on their own authority. To facilitate cathartic creative processes and artistic outcomes, participants were introduced to multiple techniques, including puppet making, hand-embroidery, machine quilting, piecing, and appliqué to highlight their personal stories.

Project Kali underlines the importance of Feminist (Art) Therapy and its implementation i.e., the facilitation of process-driven learning experiences via thought-provoking, artistic, social justice-based gatherings and dialogues for women who have experienced violence and abuse.

Community workers and counselors have developed several techniques to help women overcome traumatic experiences, but those touch upon just one tangent of the therapeutic circle i.e., Words. What I proposed through this project is the combination of Words and Action.

The overarching research goal for the project was to offer a small contribution to the future of scholarships by combining the two specialized fields of psychology, Feminist Therapy and Art Therapy, into a merged discipline of Feminist (Art) Therapy.

Some of the methods that I implemented in the project through applied artistic modalities include:

I had three data sources for the project, Mood-o-Meter & Surveys, Evaluation, and Observations & Self-Reflection.

I designed a new self-reflection technique, Mood-o-Meter, to creatively identify the feelings of each individual participant. For this to work, a range of 0-100% is used to provide a mood scale with 0% being the lowest (i.e. feeling low, bad, unproductive, bored, stressed, tired, scared, etc.) and 100% being the highest (i.e. happy, blessed, creative, excited, peaceful, cheerful, joyful, relaxed, positive, productive, grateful, content, etc.). The purpose of the Mood-o-Meter is to build group cohesion, explore feelings and emotions, develop a shared language, and understand the healing journey of each participant. 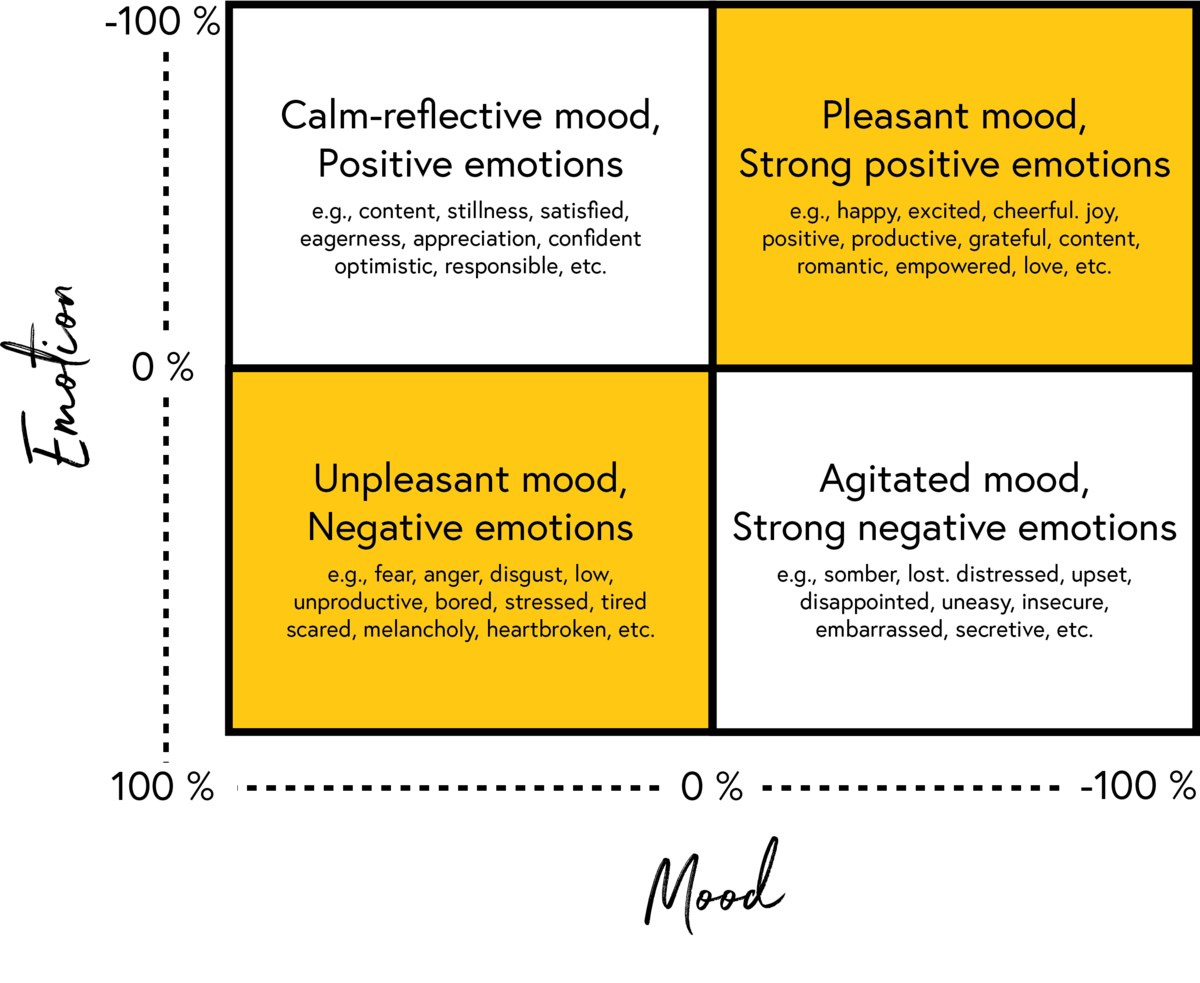 Mood-o-Meter by Hamida Khatri is licensed under a Creative Commons Attribution-NonCommercial-NoDerivatives 4.0 International License.

Self-reflection was the essential tool used in the evaluation of the sessions and the project as a whole. Participants journaled their thoughts and ideas that were collected during and after the sessions. While self-reflection is the interpretation of the unknown (undetermined project outcomes), observations become the lens through which the process of identifying and analyzing the outcomes became evidence for the success of the project. I also kept a record of my weekly observations in a notebook where I described project ideas, elaborated on each participants’ strengths as well as the session altogether, and the impact of the activities on each participants’ artistic and personal growth.

A survey of 20 questions was distributed to the Kali Warriors in the end to gather responses, comments, opinions, and feedback regarding their individual journeys throughout project implementation. It included open-ended, close-ended, and scaled questions.

A critical aspect of Project Kali was presenting the stories of Kali Warriors. The reason for doing that was to offer them the title of artists and support them in attaining actualization as self-healers. I curated exhibitions for their artworks at the Rousse Gallery, Meyerhoff Gallery, Current Space, Marylandand the Baltimore Museum of Art in Baltimore.

Throughout the project, participants demonstrated increased knowledge about art and creativity, improved sense of self, increased self-awareness, personal growth and strength of character, comfort and confidence in communicating ideas, and an increased sense of emotional well-being. 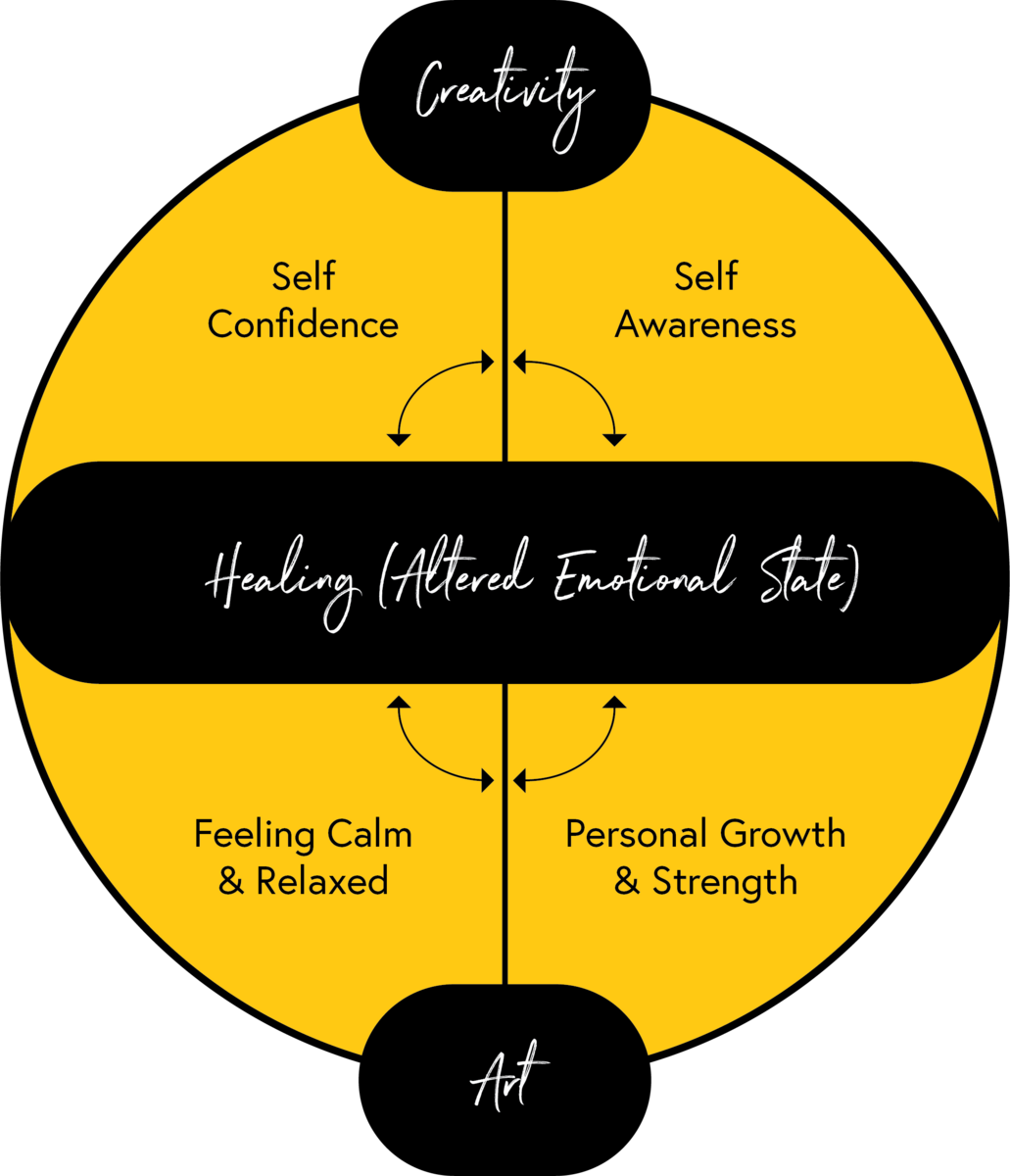 Kali is a goddess of mystic feminism. She represents a set of cultural ideals, a mythological figure committed to destroying all the evil in this world, hence portraying the true beauty that shines within all of us. She embodies sisterhood, love, caring, happiness, unity, transparency, and beauty. She is a powerful form of womanhood embellished with a garland of trophies achieved as she surpasses every obstacle and hardship she encounters. Her fearless army of weapons signifies power over defeat, authority over fear, and liberation over suffering. She represents evolution—a rebirth of self—devouring the menace of suppression, hence transforming those who believe into powerful entities.  The image of Kali is generally represented as black, just as all colors disappear in black, signifying that the supreme goddess is the source of all energies. Kali Warriors represent multiple identities such as mothers, daughters, sisters, or wives.

“Kali is the antagonist of all evil in the eternal cosmic struggle, yet she is herself the personification of all benign and terrible forces.”

According to the Hindu scriptures, Kali was a submissive wife to Lord Shiva. The mythical story shines a light on her becoming. One day when the Hindu Gods—along with Lord Shiva—waged war against the demons and were being defeated by the evil Mahishasura, Kali could not bear witness to the falling of her kingdom. Enduring the pain emanating from her anger, she transformed into a fierce warrior leading to the battle of Ambika to defeat the giant demons of Canda (the ferocious one) and Munda (the skull) sent by Mahishasura. Her story highlights her victorious transformation as she takes matters into her own hands to courageously conquer evil. Furthermore, the scripture states that she grants liberation by removing the dark clouds of defeat, despair, and degradation.

Upon looking at the progress and success of this project, I can proudly say that the Kali Warriors were able to identify changed behavior in terms of restored confidence and self-awareness. They were consistent in demonstrating resilience throughout the course of the project. Their motivation levels and commitments were stronger than before. They showed great leadership skills by co-facilitating parts of the sessions with me. They exhibited immense joy and patience. Their communication about ideas and thoughts was inspiring. They developed trust among themselves and formed a sisterhood.

Through creative artmaking, participants were able to visually identify their own emotions that led to a developed sense of self and self-esteem in sharing personal stories and identifying individual strengths, which were unknown and uncatered to before. These identifiers became the point of departure for empowering not just themselves but also the communities they interacted with.

Having an impact on Kali Warriors proved that creative learning is not just for the privileged. It is a tool that is accessible to all. It is a language that is genuine and unique in its own way, and every individual has the right to its usage. Through this project, with reference to the results, I can say that participants re-identified their own value in society by becoming self-aware. Their developed sense of self nurtured their cognitive, physical, and emotional competencies to confront individual fears and trauma by utilizing creative means to express them. They were also able to break down low self-efficacy barriers. The natural process of how a caterpillar turns into a pupa and then for days it remains in its cocoon until it breaks free to become a butterfly fits perfectly here—participants were hiding inside their unnourished cocoons, adapting to the memories of bad experiences, learning to modify their identities as they confronted their fears of self-judgment, shame, and loneliness. This project showed them that they could transform themselves into beautiful butterflies in their own way and at their own pace.

As a result of this project, I created a formula for restoring one’s self from hurt and trauma that I call the Creative Healing Axiom, which is defined as a continuous therapeutic cycle for the emotionally wounded engage in facilitated art activities, enabling them to explore difficult or painful feelings by offering opportunities to communicate unconscious processes, experiences, thoughts, and feelings.

Working with the Kali Warriors has been one of the most gratifying experiences of my life as a social justice advocate and gender-based violence expert. Through the establishment of Project Kali, we created a program that transformed women’s emotional health, stability, and wellbeing. The application of Feminist (Art) Therapy has been the key to the success of this project, which contributes to the ongoing research that I am currently undertaking as a doctoral student in the Arts, Technology, and Emerging Communication department at the University of Texas at Dallas.

I am working on devising a gender-based violence index and a storytelling mobile/web application, leading to my doctoral project where I develop a virtual reality gaming application that would allow the victims and survivors to enter simulations with varied levels of inclusion and empowerment through meaningful play to defeat the evils of depression, degradation, isolation, and neglect.

For more information on my work in progress, please visit Teardrop.

Uncategorized
This site is part of the HASTAC network on Humanities Commons. Explore other sites on this network or register to build your own.
Terms of ServicePrivacy PolicyGuidelines for Participation